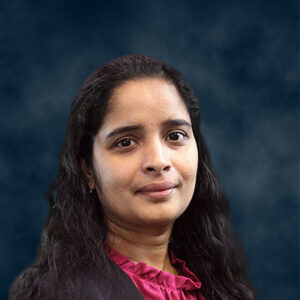 About Revathi
Revathi Chapa is a Scientist-II at Simulations Plus where she is involved in the development of PBPK models for predicting Drug-Drug Interactions, and creating large databases for oral, oral cavity, and ocular physiologies for various pre-clinical species and humans. She also designs modeling strategies for developing in vitro-in vivo correlations (IVIVCs) for long acting injectables (LAIs).

Revathi Chapa received dual master’s degrees in Pharmaceutics and Pharmacology, and Toxicology from the University of Washington and the National Institute of Pharmaceutical Education and Research, Punjab, India. Before joining Simulations Plus in 2019, she worked as a Research Scientist at the University of Washington where she collaborated with the National Institutes of Health (NIH) and the Food and Drug Administration (FDA) in the development of PBPK models to predict adult and pediatric drug disposition, as well as response of drug molecules by bottom up and middle-out approaches using PBPK modeling software. Prior to that, she worked with Dr. Reddy’s Laboratories for two and half years, where she was involved in product development from introduction to completion, and in filing of Abbreviated New Drug Applications (ANDA’s) including immediate release (IR) drug products, controlled release (CR) drug products, and Biopharmaceutical Classification System (BCS) based bio waiver for a drug product with US FDA.