Colchicine is a plant alkaloid with a broad spectrum of biological and pharmacological properties. It has found application as an anti-inflammatory agent and also shows anticancer effects through its ability to destabilize microtubules by preventing tubulin dimers from polymerizing leading to mitotic death. However, adverse side effects have so far restricted its use in cancer therapy. This has led to renewed efforts to identify less toxic derivatives. In this article, we describe the synthesis of a set of novel double- and triple-modified colchicine derivatives. These derivatives were tested against primary acute lymphoblastic leukemia (ALL-5) cells and several established cancer cell lines including A549, MCF-7, LoVo and LoVo/DX. The novel derivatives were active in the low nanomolar range, with 7-deacetyl-10-thiocolchicine analogues more potent towards ALL-5 cells while 4-iodo-7-deacetyl-10-thiocolchicine analogues slightly more effective towards the LoVo cell line. Moreover, most of the synthesized compounds showed a favorable selectivity index (SI), particularly for ALL-5 and LoVo cell lines. Cell cycle analysis of the most potent molecules on ALL-5 and MCF-7 cell lines revealed contrasting effects, where M-phase arrest was observed in MCF-7 cells but not in ALL-5 cells. Molecular docking studies of all derivatives to the colchicine-binding site were performed and it was found that five of the derivatives showed strong β-tubulin binding energies, lower than −8.70 kcal/mol, while the binding energy calculated for colchicine is −8.09 kcal/mol. The present results indicate that 7-deacetyl-10-thiocolchicine and 4-iodo-7-deacetyl-10-thiocolchicine analogues constitute promising lead compounds as chemotherapy agents against several types of cancer. 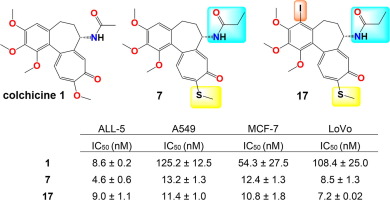