The central focus of MBR&D is not the mathematical equations but rather the conceptual synthesis process that integrates all available information and rational extrapolations to better understand drug pharmacology in the context of the disease process. The outcome of this synthesis process is a conceptual schema, a term borrowed from database design.(1) The schema represents a series of assertions about the nature of the disease process and drug pharmacology. It describes the entities of significance to a research program, their characteristics or attributes,and the relationships between pairs of entities thought to be significant.  An example of such a representation is the conceptual schema provided by Snoeck et al.(2) in a recently published comprehensive hepatitis C viral kinetic model. 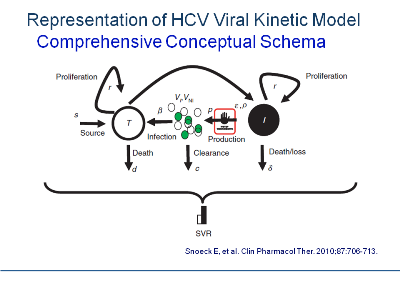 The conceptual schema identifies the known elements of the disease process, defines the hypothesized interrelationships between disease process and drug effects, and states the assumptions required to complete the picture. It is a way of picturing, preferably in a process-flow format.(3) the current state of affairs. It provides a means to specify the ways in which data can be integrated across functional areas to yield new results or insights.

Over the R&D life cycle, the schema evolves from a descriptive illustration/diagram that outlines the initial ideas and hypotheses into a more analytic and predictive blueprint/disease process map as new data are generated.(4) The success of science-based R&D is utterly dependent on the collaborating scientists’ willingness to engage in a robust, interdisciplinary knowledge synthesis effort. This dependency is based on several realities.

First, the complexity, utility, and validity of the disease–drug model, including the conceptual schema and the attendant mathematical equations, are directly related to the quality of interdisciplinary collaboration and the current level of understanding of the underlying disease processes and drug pharmacology.

Second, the knowledge synthesis task is becoming both more difficult and more imperative as our knowledge base expands at an exponential rate. This requires an interdisciplinary framework for assembling and investigating the various components of the conceptual schema and the ability to visualize or hypothesize the interactions between the components.

Third, during the earliest stages of research, particularly in a first-to-market scenario, little or no relevant data may be available about the target disease process or drug effects. Consequently, the development of the schema requires extrapolation by knowledgeable experts with the ability to discern potentially valuable but not obviously relevant results.

Finally, the acceptability of the disease–drug model as a basis for decision making is predicated on the team’s understanding and support of the conceptual schema. Team involvement in developing and applying the conceptual schema to hypothesis generation is crucial for this support. With this understanding, the disease–drug model becomes less of a “black box” and a more acceptable basis for decision making when substantive resources are to be placed at risk by funding a development program.(5)